CHECK IN & CHECK OUT 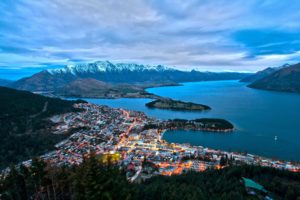 Queenstown, New Zealand a beautiful mountain town on the shores of Lake Wakatipu. Surrounded by dramatic mountains and hills Queenstown is picture-perfect in any season. Well known for adventure sports like Bungy jumping off the Kawarau Bridge to White Water rafting, there is always something to do here. In Winter the town comes alive with Apres Ski activity after a day on The Remarkables, Coronet Peak or neighboring mountain Cardrona.

The land that we now call Queenstown was originally settled by the Maori around 1000 years ago. By the time the Europeans arrived in 1850, the settlement had long gone. Then came William Ree’s. William Gilbert Rees was an explorer, surveyor, and early settler in Central Otago, New Zealand. He and explorer Nicholas von Tunzelmann were the first Europeans to settle here in Queenstown. Ree’s established a high country sheep farm and created a lucrative business and residential stake in the town we now live in today. You can find a statue of William Ree’s and his Sheep down on the lakefront in Queenstown CBD. Lake Wakatipu is New Zealand’s longest lake, they say it is deep enough for the lake floor to be below sea level. Beware in the Summer, shes still very cold to swim in because the lake is glacially fed by the mountains giving it that crystal clear blue colouring. Queenstown is rich in gold mining history, so much so that there is an old Chinese settlement still, in Arrowtown, this is where miners lived when working on the Arrow River. The Shotover River was one of the world’s richest gold-bearing rivers during the gold rush era in the late nineteenth century. You can still gold pan today, good luck, you never know what you will find. If you have any questions you would like to ask before making a booking, please feel free to reach out directly by using the form below.